One does not usually achieve personal growth from fair weather, easy riding, good times and success.  In fact, those things often create complacency and laziness. While I can not speak for anyone else, this has been my personal experience.  In life it seems that whenever I have achieved my goals or had any measure of success, I tend to revert into someone I don’t want to be and that I do not like. This knowledge is of the utmost importance in my journey around the world and through life. I must struggle and face hardship in order to be the best version of me that I can be.  This is a blessing but like all blessings, it is also a curse.  I am constantly forced into conflict but as a result I am a better man for it. I am a better man because of it.  My awareness of this allows me to face  challenges with a happy heart and a positive disposition because I know that on the other side there will be growth….  even if it sucks right now.

One of my best friends Gordon once told me that there are two kinds of people in this world,  sheep and tigers. The sheep are the ones who tend to stick to the herd, to go through life with white unblemished wool. Their lives are relatively easy and they go through life without too many problems. In essence some people were born on easy street and they stay there.  If your one of those people then good for you!  Life is easier and likely better that way.  The other group, the tigers are born into a world filled with hardship or it quickly finds them as they make their way through life. They have to hunt and fight to survive. Each stripe and every scar represents a battle, a hunger or a hardship. Without that they can’t eat, they can’t function, and ultimately cannot survive. The analogy works on many levels and even if it is not true, I do believe that there is truth in it. The road from Colorado through New Mexico and into Amarillo was one of those days I earned both, a stripe…. and a scar. 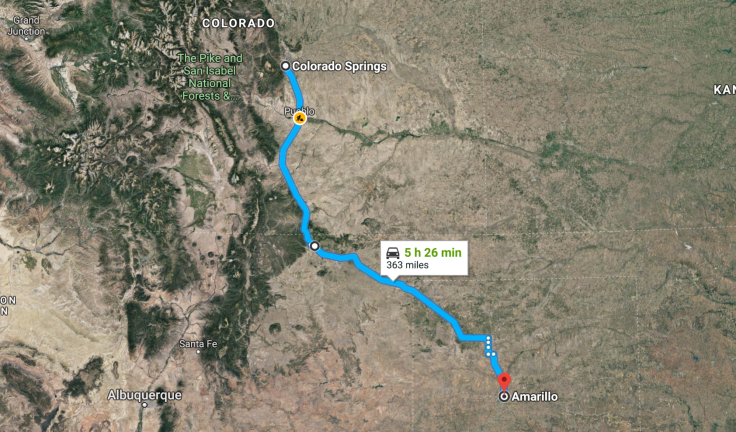 The Road to Amarillo

We had reserved the hotel room the night before we left Colorado and we were bound and determined to get there.  It was surprisingly cold that morning.  We headed south out of Colorado and into New Mexico.  When we crossed the state line it was as if god had sent the locusts himself.  I mean these bugs were huge!  At 70 miles per hour it was like someone was throwing marbles at you.  It felt exactly like getting hit with a paintball gun at close range.  It was not enough to stop me…. So the universe of course made it even harder.

The Bugs…. or whats left of them

An Ocean of Windmills

As we descended through the canyons and into the plains an ocean of windmills sprang into the sky out of the expanse, wearily waving at us as we went by.  At first it was beautiful as if they were waving from the side of the road. Then their hands began to pick up pace, moving faster and faster.  The winds picked up to between 60 to 80 MPH and would change directions in a moments notice.  I was being blown from one side of the highway back across to the other with each gust.  I had to cut my speed by more than half in order to maintain my balance and composure. This made what was supposed to be a 5.5 hour trip turn into more like 7. The wind began to throw tumble weeds at me.  Some of them exploded under my wheels.  One not only hit my boot but busted a hole straight through the leather, cutting into my foot (thus leaving that scar).  The bugs kept pounding, leaving bruises underneath my leathers but I was not done…. and neither was Mother Nature.

The sky became shades of grey and black….  My lungs began to burn as they filled with smoke. This whole ride felt  like the apocalypse. It seemed like I had found the highway to hell that AC/DC won’t shut up about. I pulled over, put on a balaclava and covered that with a bandanna. I put my helmet back on and I kept pushing forward.  The grasslands all around me were smoldering, scorched and black. The fires still burning in the distance sent plumes of smoke into the atmosphere. The juxtaposition of the cold air and burning earth was frightening. I finally made it to Amarillo and to safe haven.  I ate, bathed and then slept for the next 14 hours. For once I was thankful to be off the bike for a while.

The next morning we headed to the world famous Route 66 and to Cadillac Ranch which is located just outside Amarillo.  It is just about the only thing to see in this place.  The story about how they got there is pretty interesting though.  We heard about it from a local so I am not sure if it is 100% true, but I will share it with you anyway. 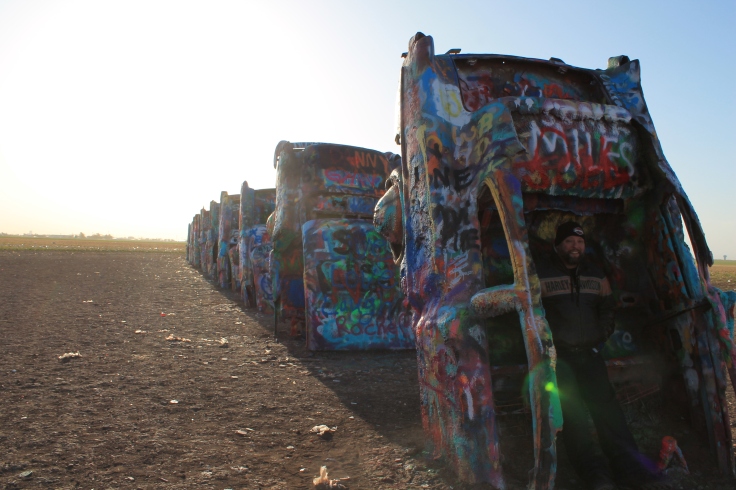 Apparently there was this multi millionaire who was “eccentric” AKA crazy.  He owned all this land in Amarillo and wanted to do something out of the ordinary with it.  He hired these hippy artists from San Francisco to put in an art installation in this empty field.  They then buried 10 Cadillac’s face down into the ground.  Some of them were still working when they buried them.

While I would definitely stop by Cadillac Ranch on your way through Amarillo…. I have to say I wouldn’t make a special trip just to see it….. As Amarillo is one of the armpits of America and it is literally the only thing to see in Amarillo other than the Cracker Barrel…

If your from Amarillo and you love it there and I offended you…. I am sorry.  If it is any consolation, the people from Amarillo all lead magical lives…. because everywhere you go in the world…. its likely to be better than where your from.

If you are a millionaire from Amarillo or just someone who loves what I am doing and want me to keep producing great content, please consider helping to support me to make more great articles and Vlogs through Patreon…

I also do Amazon Affiliate Marketing which means that if you go to Amazon through any of the links below it will help me to keep creating great content. you dont even have to buy what is linked…. even though you should as it is awesome Runkle approved gear.

Donate for a Good Cause

Donate to help the Shriners Hospitals for Children